Goa is well known for its incredible beaches, cheap booze, delicious seafood, and much more.  Goa has so much to offer to everyone, whether you are looking for secluded beaches or fueling the adventurous spirit animal inside you. Hidden beaches with serene backdrops and calm sunsets, small shacks making delicious local cuisines, eye-catching ruins of historical forts- Goa has it all. It is time you start adding new places to your itineraries and expand your horizons on how much more amazing your vacation can be. Get going, guys and gals!

Goa has hidden the Kakolem beach waterfall and the Querim beach like a well preserved secret. The adjoining village of Netravali is home to the lush Netravali sanctuary and the secret bubbling lake of Netravali. The Arvalem Waterfall, Caves and Rudreshwar Temple in Goa too are a hidden gem and deserve an entire day dedicated to exploration and adventure. Finally, Fontainhas is hidden in plain sight in the capital town of Panjim.

Goa has something to offer for everyone- ranging from partying at various nightclubs to enjoying a relaxing secluded getaway in a 5-star resort. This article is not about famous beaches like Baga, Candolim, Calangute, Palolem (the list goes on)and neither about the glorious eateries and pubs namely- Titos, Thalassa, Fisherman’s Wharf, etc.

There are various beaches, restaurants, and other places scarcely explored by tourists and hardly mentioned by local guides and blogs.

Let’s start with an unexplored beach. First up is ‘Kakolem Beach, which is also known as the ‘Tiger beach’. It is one of the rawest beaches in Goa’s Southern parts, 15 mins drive from the famous Agonda Beach. People say it was earlier the hunting grounds for tigers. The shiny, smooth sands and the clear water dazzling ocean will take your breath away. There are no shacks nearby, which makes the place calm and soothing.

The adjoining Kakolem waterfall is an untouched beauty and safe to bathe in. Kakolem Beach is surely going to be on the next Goa itinerary. 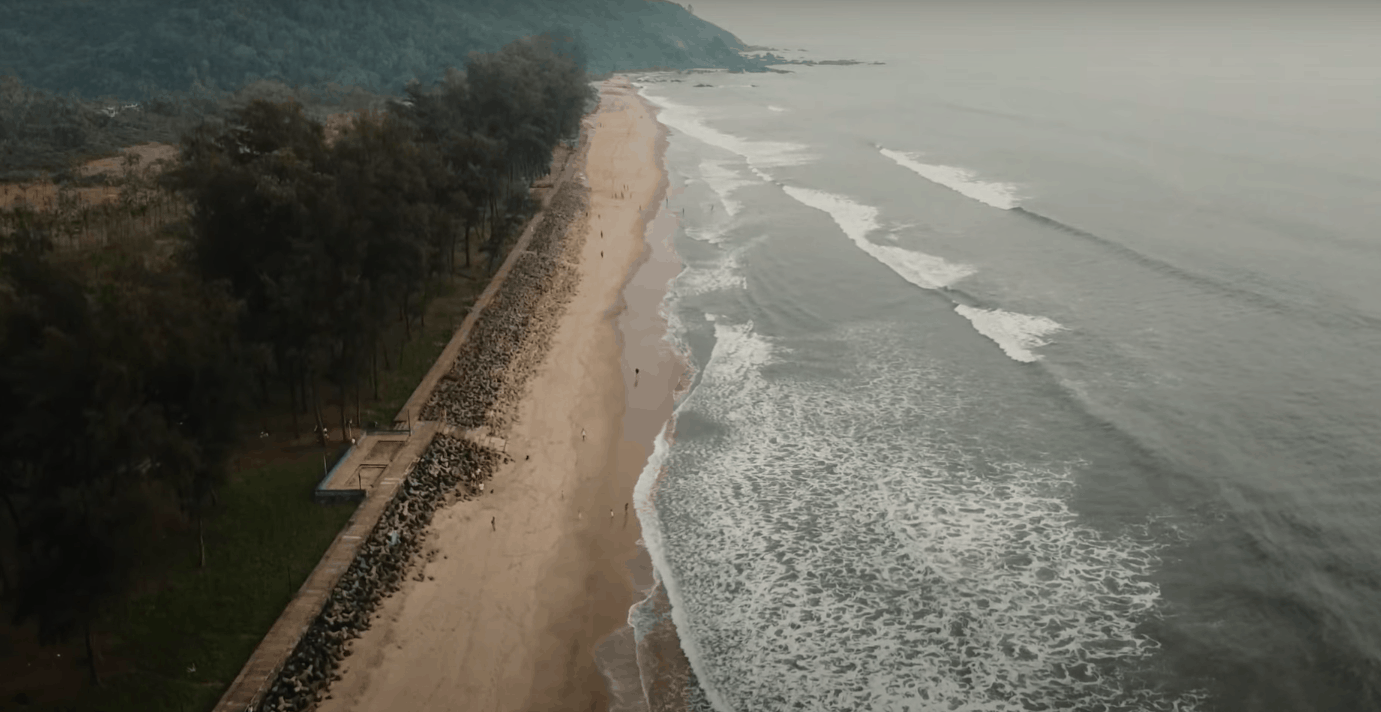 Another beach on the list of hidden sandy getaways is ‘Querim Beach’. This one is quite far off from the main city (50 km). Querim beach has one of the longest waterfront stretches due to a surplus of sand and lack of rocky areas in between. It is located in the northernmost parts of Goa, but the lack of tourists makes it a very calm and serene getaway for friends and families. The best months to visit this beach are between March and June, when you will be blessed with one of the most beautiful sunsets of your lives. Don’t forget to carry for picnic stuff, and make sure to add the name to your itinerary right away.

See also  How much does Food cost in Goa?

How to get to Querim Beach?

The best way to get to this beach is by bike from the main city. It is nearly a 1.5-hour ride from Panjim. It is one of the northernmost beaches and lies quite up ahead of Armbol beach. You may either take Aguada to Siolim road or the Duler to Sodium and then the Querim road to get there.

How Far is Querim beach from Calangute?

Querim Beach is around 30 km from Calangute and Baga. You can easily hire a bike, car, or a cab from any beachfront to Querim Beach.

Are Bathrooms available at Querim Beach?

Yes, Bathrooms are available at the beach, albeit at a small fee sometimes. These are mostly located in the shacks present on the beach. You may take a bio break or change your clothes here after a swim on the beach.

Is Querim Beach safe to swim?

The Querim (Keri) beach is not considered safe for swimming, especially at the Tiracol Estuary mouth.

Moving on from the beaches, next up is a hidden lake. ‘The bubbling lake of Netravali’ is an artificial reservoir found in the village of Netravali. The Netravali Lake goes by many names, such as Budbud, Budbudyachi Tali, and Bubble Lake. Budbud means bubbles in Konkani. 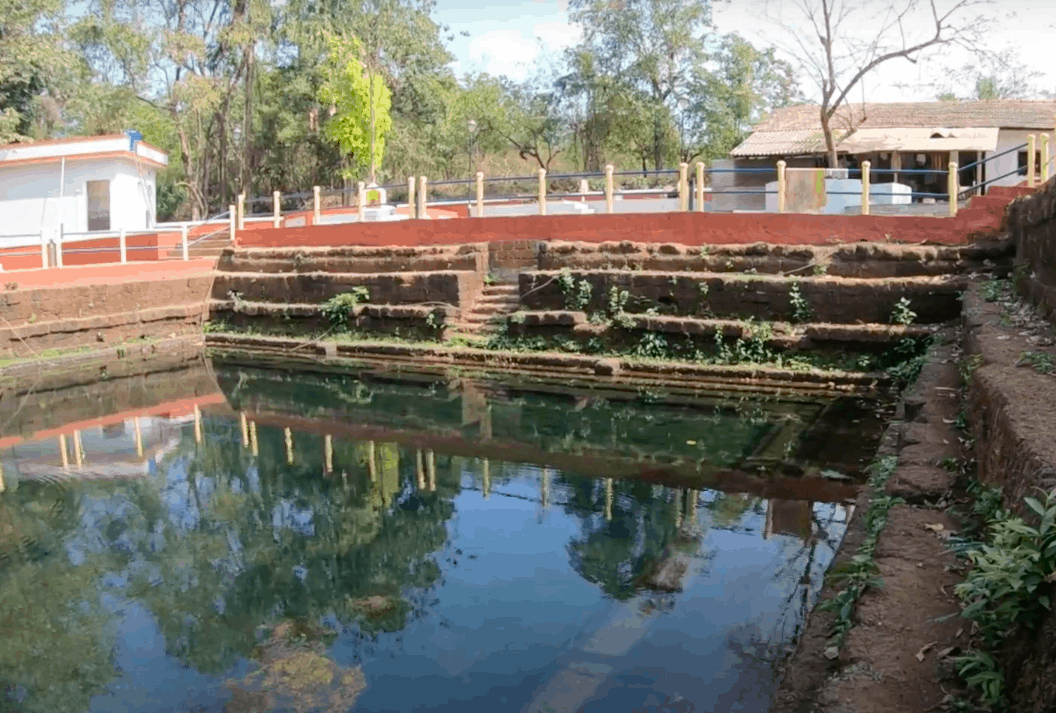 It is a beautifully made stepped pond lined with granite rocks leading to a central water body. It gets the name from mysterious bubbles coming out from the water. Many theories are surrounding the origins of these bubbles. Some claim that they are the local deity’s work, while others say that they are due to sulfur dioxide gas, another theory related to methane gas production is disproved as there are several fish in the reservoir.  These bubbles also appear to rise faster when someone claps near the pond. This is an intriguing place to visit for Adults and children as well.

There is also a beautiful Gopinath (Krishna) temple nearby. The original idol that was in this temple since the 14th Century has since been moved to the Goa State Museum in Panaji. The current idol depicts Lord Krishna playing the flute under the ‘kalpavriksha’; the divine, wish-fulfilling tree in Hindu mythology.

The Netravali Wildlife Sanctuary is an ode to the fence fauna and majestic mountains of the Western ghats. A tranquil picnic spot is a delight for bird watchers. The sanctuary is home to the mighty waterfalls of Saivri and Mainapi. The Netravali Sanctuary is ideal for trekkers and dotted with several temples.

The sanctuary is home to wildlife such as black panthers, hornbills, king cobras, giant squirrels, etc.

Where to stay when visiting the Netravali Wildlife Sanctuary?

Accommodation is available in the forest itself by guest houses run by GTDC- Goa Tourist Development Corporation.

How to get to Netraveli?

Netraveli is a village around 50 km from Margao and 80 km from Panaji. The village is approximate 32 km from Palolem.

You may take a hired vehicle or a cab to Netraveli.

Next on the list is something that will satisfy your hunger for adventures. Located in the Sanquelim area, there is a 50-meter high waterfall, ‘Arvalem Falls (Harvalem Falls)’. It is a beautiful place to relax and get lost in the astonishing arms of nature. The sound of water gushing and falling onto the rocks makes it a mesmerizing experience. An old arched bridge situated at a small distance from the falls makes a perfect spot for some scenic photographs and also offers great views of the waterfall. Harvalem falls situated between the woods, and it is one of the most hidden places in Northern Goa. The best time to drop by is right after the monsoon months between September and January.

The Arvalem rock-cut caves are at walking distance from the falls. It is believed that these caves were either carved by Buddhist monks or by the Pandavas, who took refuge in them for a while in their 12th year of exile. The exact time period is not known. 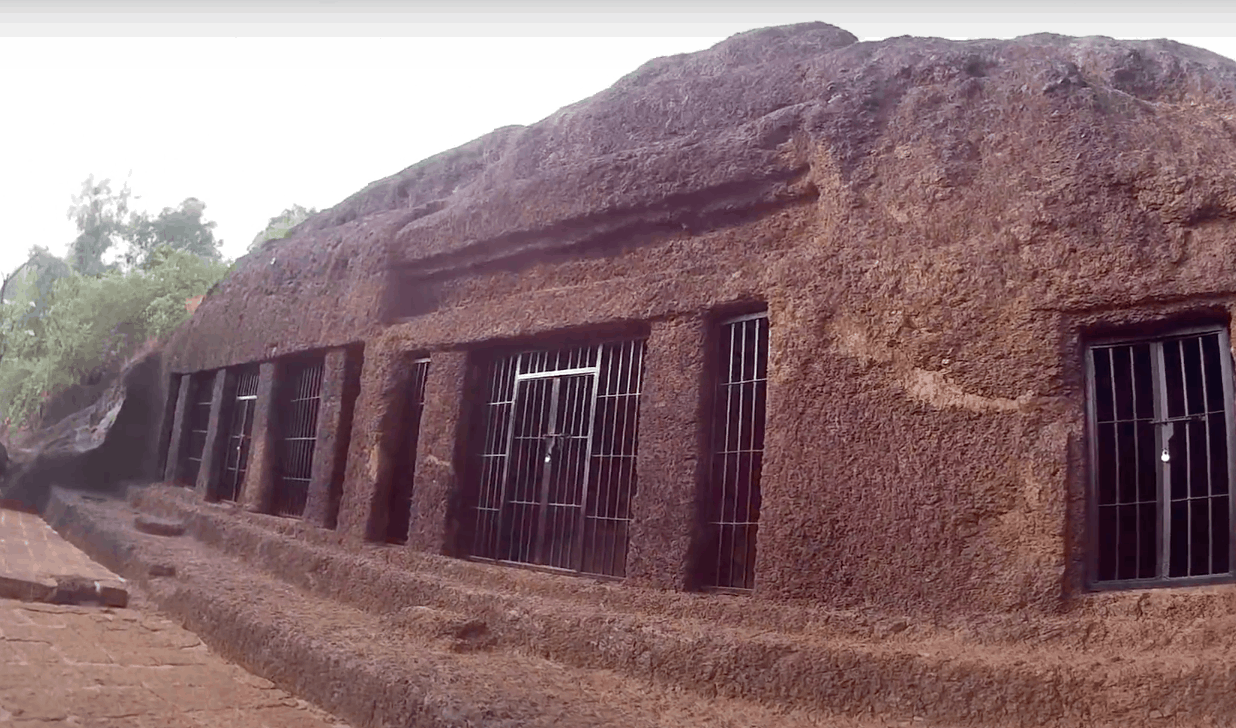 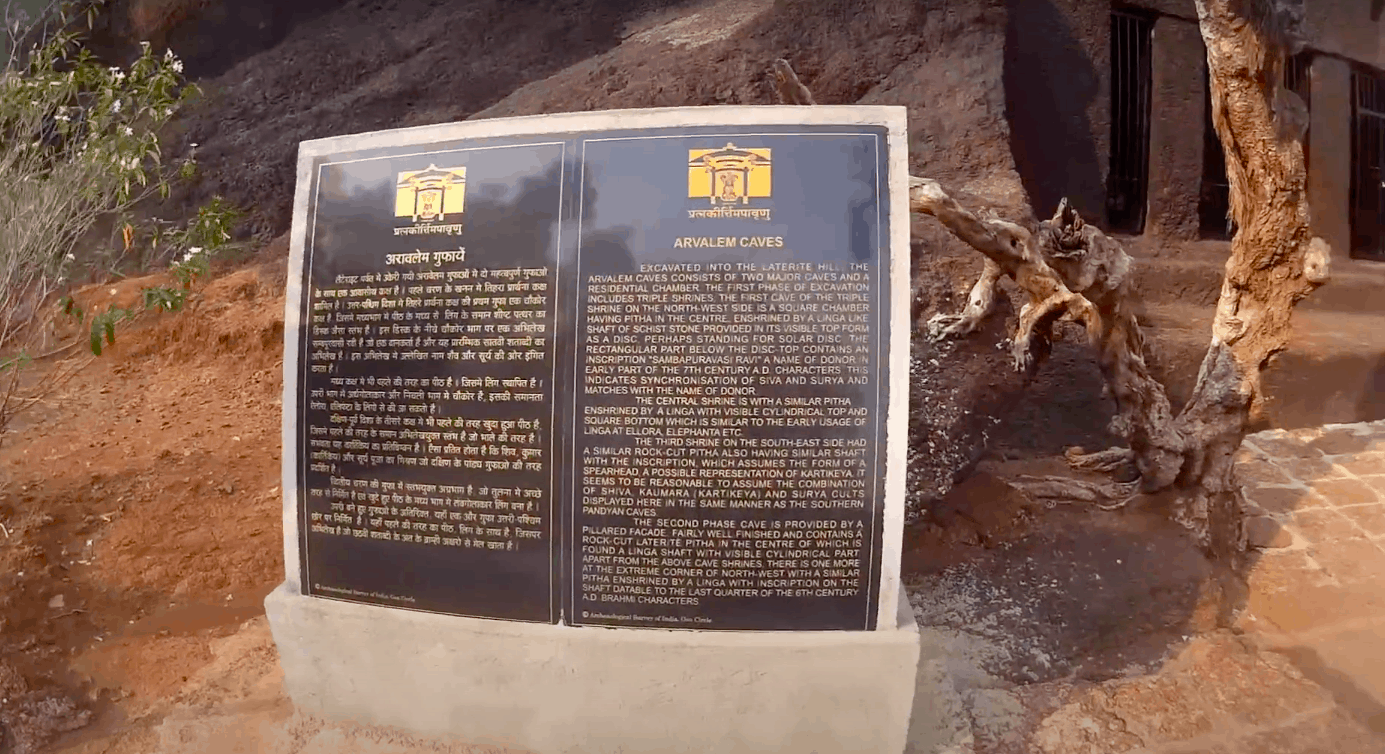 Also at walking distance from the falls is the Rudreshwar Temple. The temple and the waterfalls form a picturesque scene with the stone staires leading the temple is on one side and the bridge is on the other side of the falls. 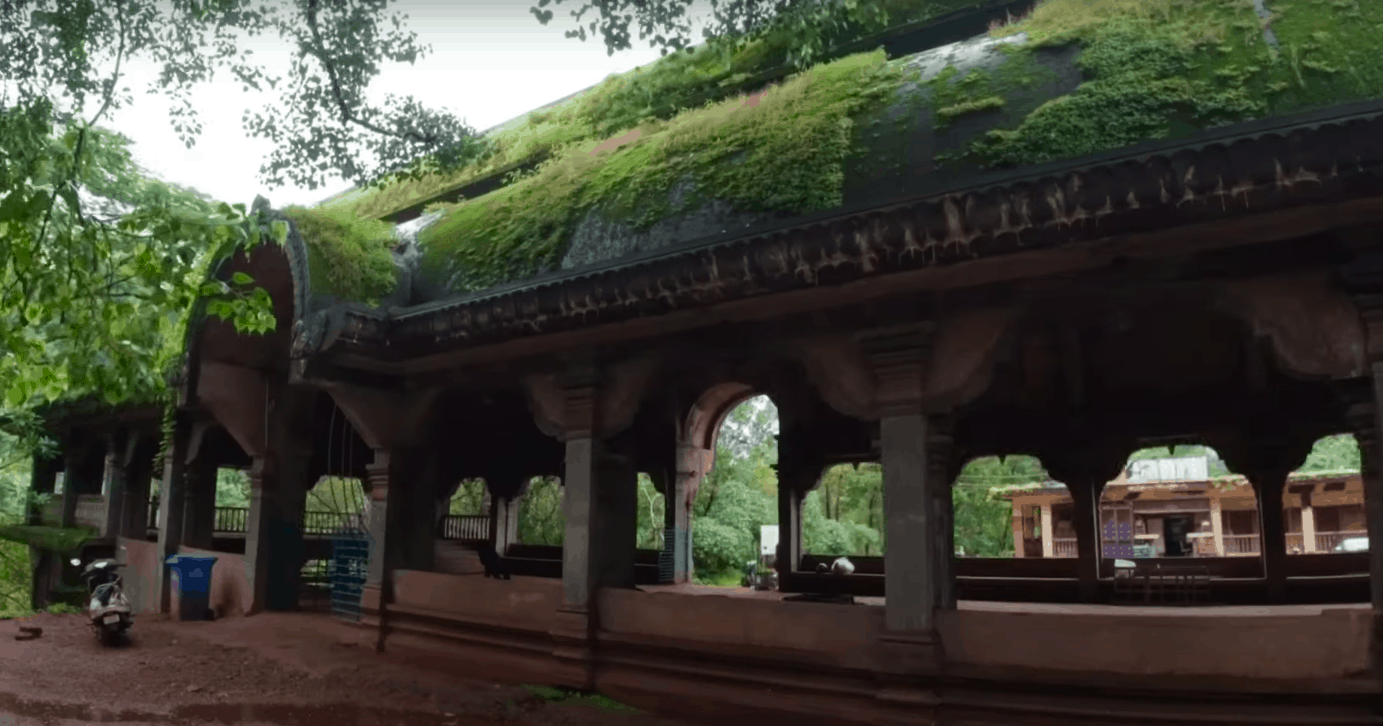 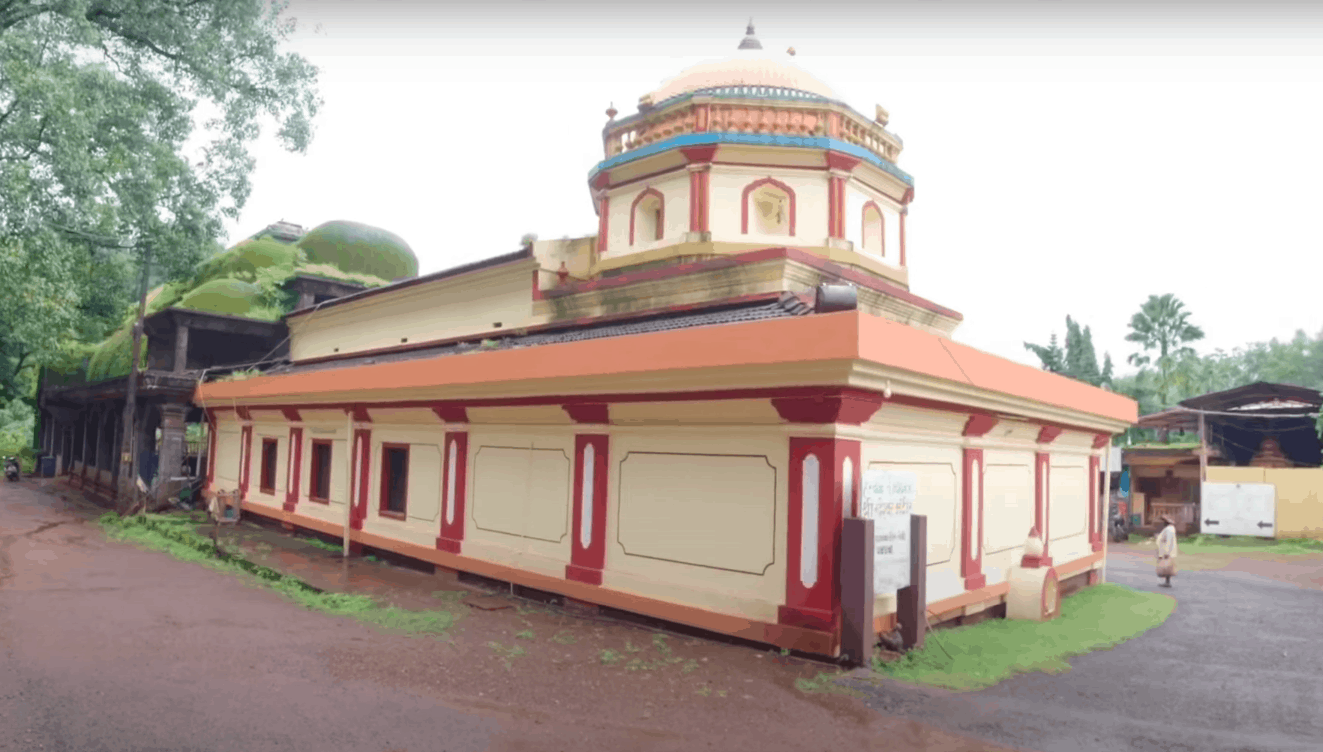 How to reach Arvalem?

The Arvalem are located near Mapusa in North Goa. The closest villages are Bicholim, which is 8km away, and Sanquelim, which is 2km away. Transport is available from Panaji and Mapusa to reach the falls.

If you are a history or architecture lover, don’t worry; we got you covered. Near to the Candolim beach, there stands the ‘Sinquerim Fort’. It is a beautiful fort that was built in the 17th century. This fort was used as the anchor spot for almost all trade ships coming to the state. Culturally important and historically significant, Sinquerim fort also offers an amazing viewpoint for watching the sun setting over the dazzling oceans. Try to visit between January and June so that you can enjoy the water sports on the beach next to the fort and then drop by to watch the sunset.

An extension of the Aquada fort, this lower fort consists of a bastian and fortified walls on all sides. This fort served as a gardian to Goa against the Portugese and the Marathas. Ships used to anchor next to this fort in the far 16th century. 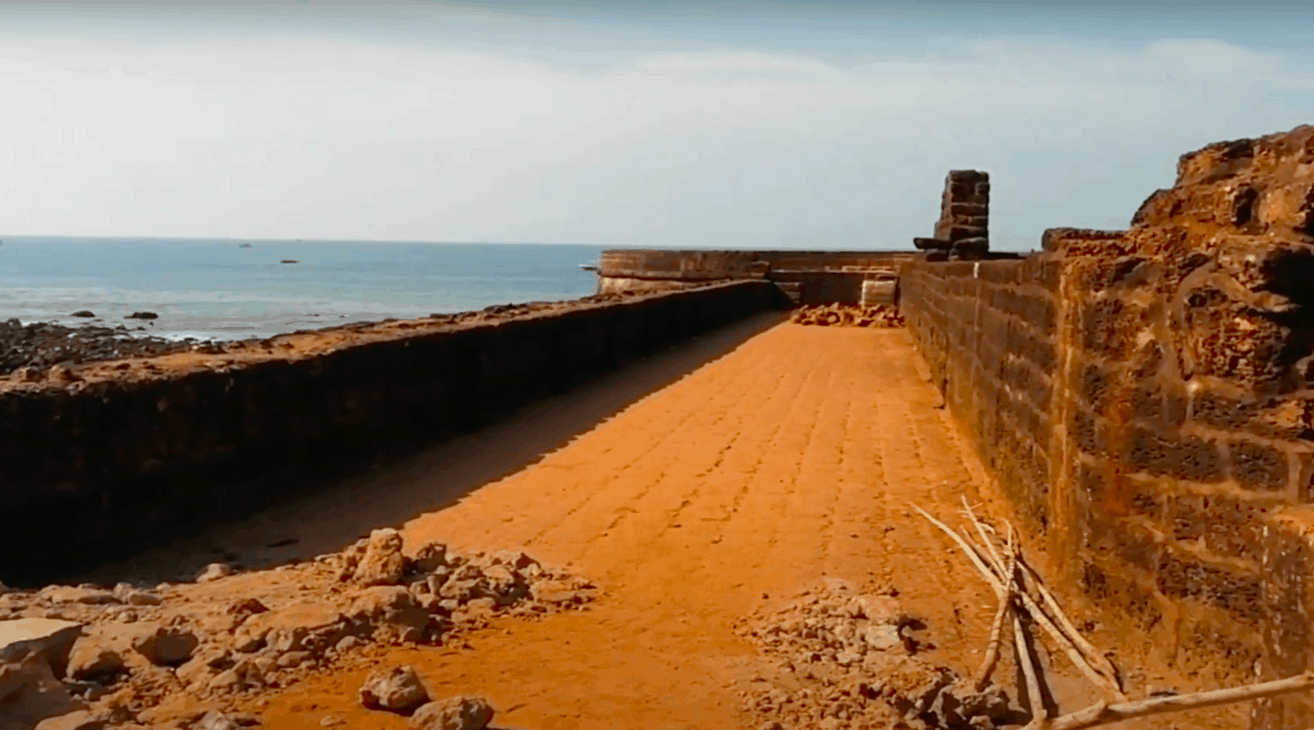 How to reach the Sinquerim Fort?

A 13 km ride away from Sinquerim Beach, is 45 mins away via the Betim–Verem–Saligao Road. 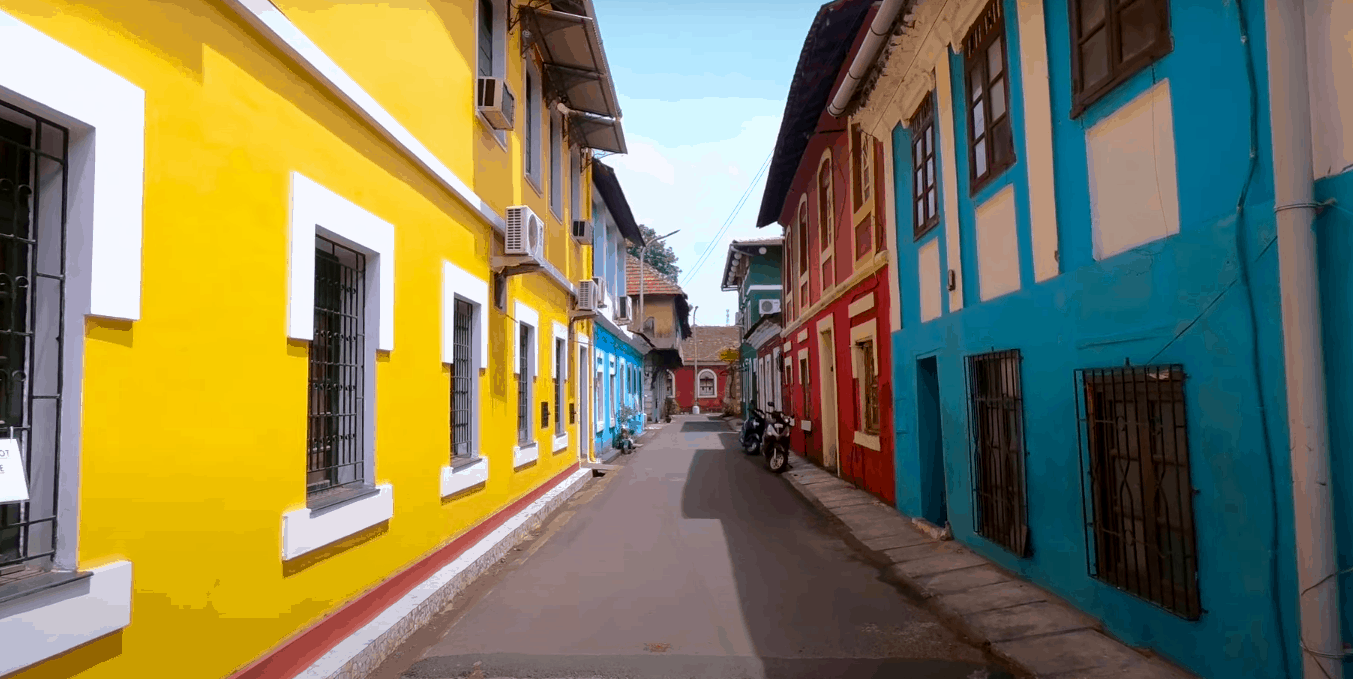 Moving on, next up is an area which many might have seen in movies. The ‘Fontainhas’ is known for the narrow lanes lined with colorful facades. An old Latin quarter with great influences of Portuguese architecture makes it an eye-pleasing place to visit. It also has a St. Sebastian Chapel on one end and a beautiful creek on the other which creates a beautiful setting for pedestrians. There are numerous Goan eateries and small cafes which offer amazing local cuisines. For all the aesthetic lovers out there, this place guarantees you a new profile picture a well. Drop by any time of the year to get an amazing experience of traditional Goa. There are several walking tours available in the area that you might enjoy. Don’t forget to bring your camera along.

If you happen to be strolling in the lanes of Fontainhas, stop by ‘Viva Panjim’ for local delicacies or ‘Route 66’ café for amazing American food. You can also get amazing hi-tea snacks at ‘Bombay coffee Roasters’ or visit ‘The White Balcao’ which is one of the most beautiful little cafes you can find in Goa.

Good food and drinks is what Goa is known for. ‘Infantaria’ and ‘Bomra’s’ are a must-visit if you are near Calangute. Another amazing shack to add to your list is ‘Dropadi’ situated on the Palolem beach itself; it offers amazing seafood preparations.

This was a short compilation of what you may want to tick off on your next visit to the beautiful state. Till then, keep Goa in your hearts. 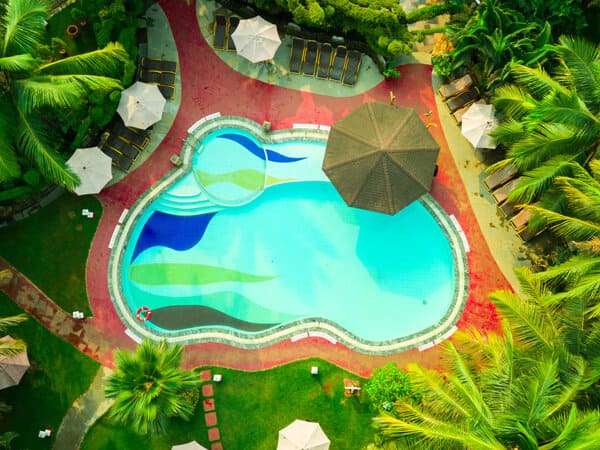 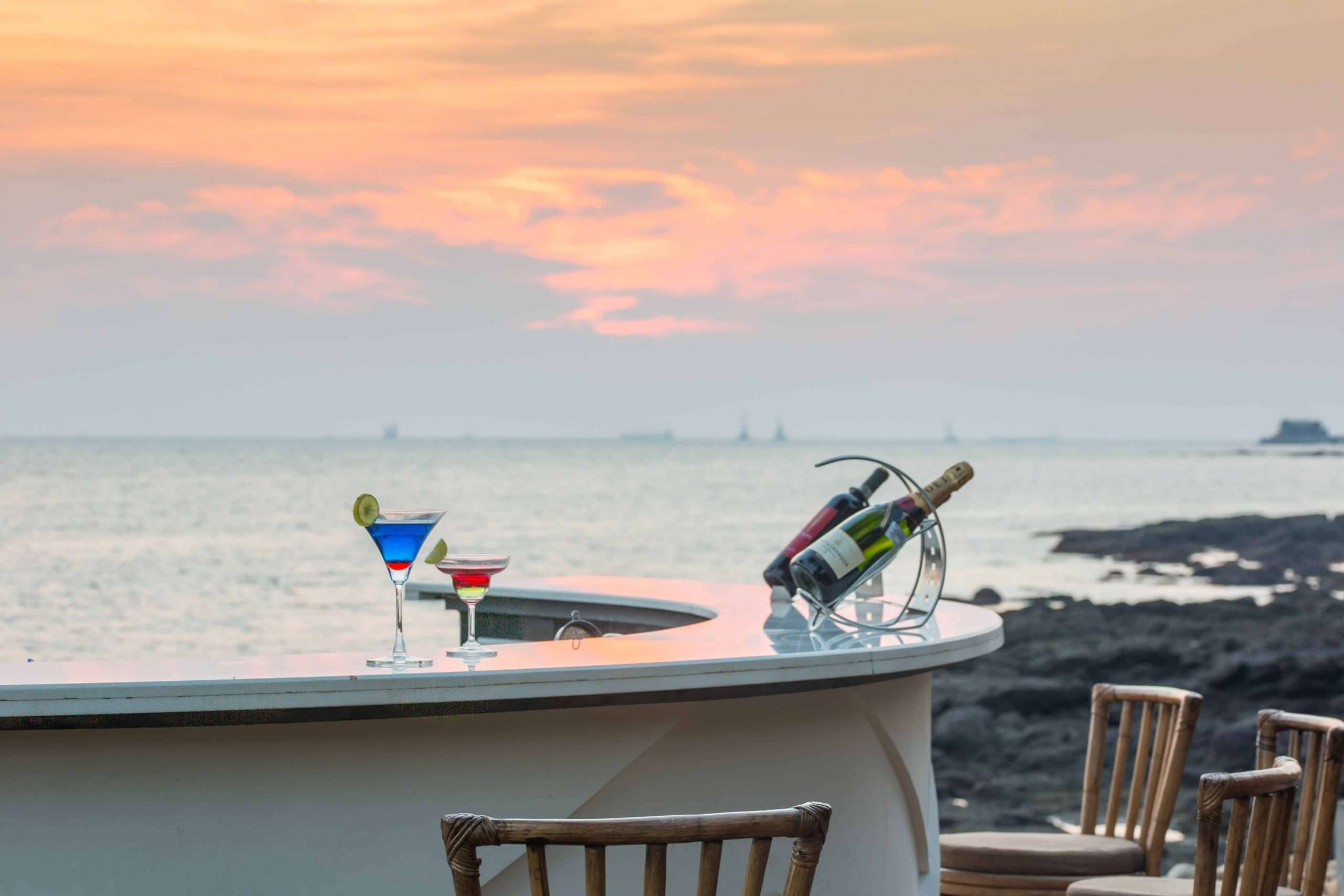 10 Luxury Resorts in Goa with a Private Beach 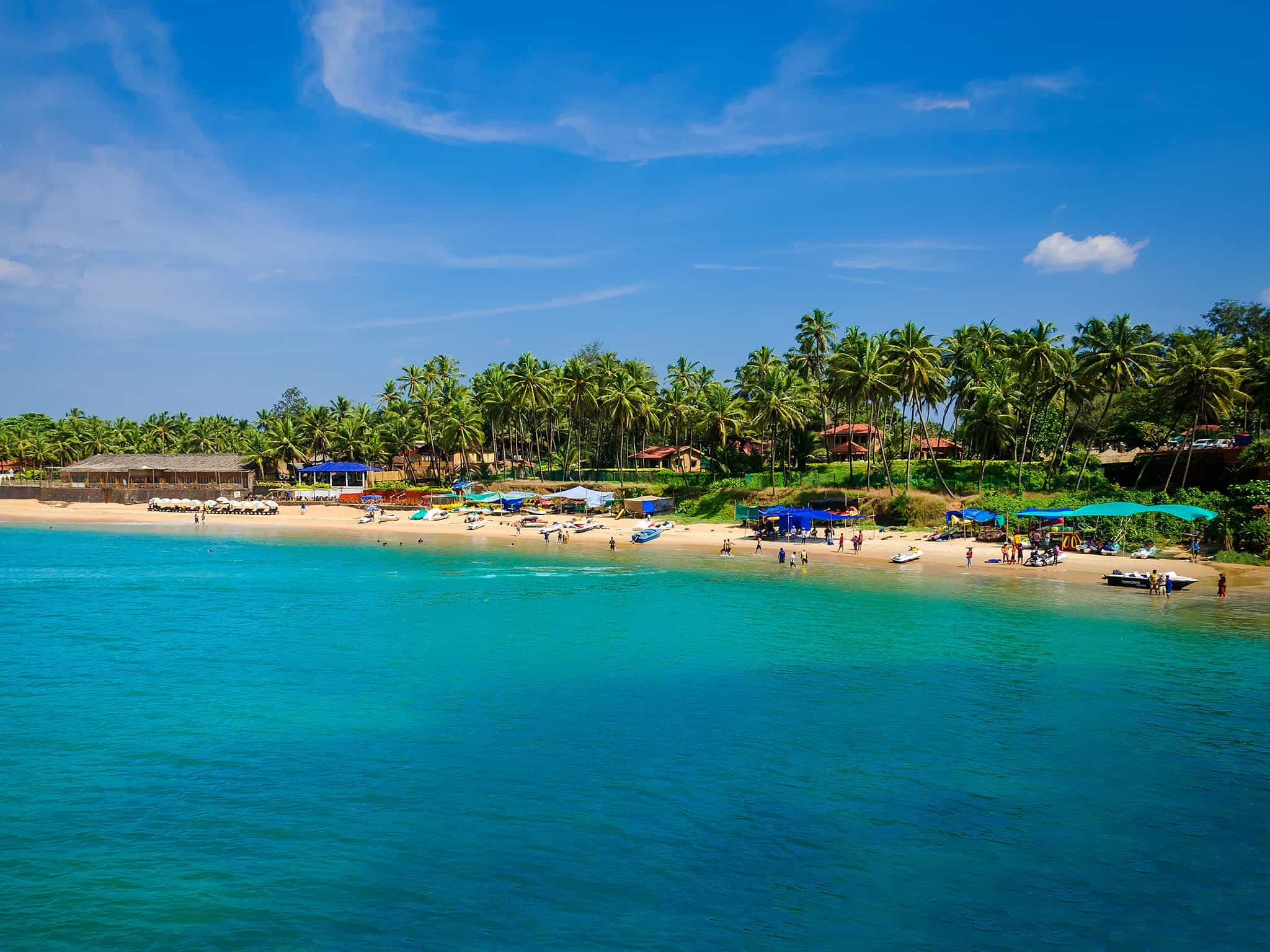 Goa 101: A Detailed 5-day Itinerary for the land of beaches